Know.Your.History. Call of Duty is coming back with a new tale of the Black Ops within the Cold War. Let's check out the reasons to play it

Activision sudden reveal of Call of Duty Black Ops Cold War was a surprise (well, obviously, since it was unexpected) but it sure was a welcomed one.

However, if you haven’t seen anything about the game (or you are rightfully cautious about a new Activision game), here are 7 Reasons to be Excited about the new Call of Duty.

First thing first, it’s a reboot of arguably the best Call of Duty ever.

And if Modern Warfare (2019) shows anything, is that the developers under Activision can still make some good stuff.

That is to say, this reboot is in hands of Treyarch, who were the architects of the Black Ops series, so we can be at ease that this game should do the series some justice.

Yes, graphics aren't everything, but it surely is better to look at pretty graphics, even if the rest of the game is subpar.

Of course, there is still quite sometime before the launch of the game, and Activision is known for visual downgrades (not as much as Ubisoft, but still).

However, Modern Warfare (2019) looks really nice, so it’s fair to say that Call of Duty Black Ops Cold War will follow through.

There’s also the fact that this is a Treyarch game, and even the first Black Ops looks pretty (although a bit aged) to this day.

The reveal trailer left something really clear; this game will have an interesting campaign, to say the least.

The trailer ends with a bold statement “KNOW YOUR HISTORY OR BE DOOMED TO REPEAT IT.”

And it’s inspired in actual events, which of course, will be embellished for the sake of narration and gameplay.

We also can expect a Hollywood-esque narration like Modern Warfare (2019), but it’s fair to say that this is the most intriguing storyline in a Call of Duty campaign in almost a decade.

The cherry on top is that we’ll also be able to see once again some fan favorites like Mason and Woods.

Sure, most people playing COD online right now are only touching the Warzone mode, but there are still plenty of fans of good old classic CoD multiplayer, and apparently, it will be back in all its splendor.

Let’s just hope that the servers actually work this time around (I’m looking at you, CoDWW2).

MP mode will be basically a revamped Black Ops IV multiplayer mode, according to YouTuber TheGamingRevolution, you can see more of this in the video down below.

It wouldn’t be a Treyarch CoD without zombies, so of course, it will be back.

If it’s something like WW2 zombies mode (fun, but unfulfilling) or more akin to the old Black Ops zombies (perhaps we will see Richtofen once again, that would be extremely cool), only time will tell, but it’s definitely something to be excited about.

06 CALL OF DUTY IN THE WARZONE

Of course, this isn’t something that should surprise you.

Warzone mode, the extremely popular battle royale of CoD, will also be featured as part of Call of Duty Black Ops Cold War.

However, Activision confirmed that Black Ops Cold War will support crossplay, cross-progression, and cross-gen in all platforms.

That means that basically anyone can play Black Ops Cold War, it doesn’t matter if you have a PS4, your mates have a PC, and your sibling has an Xbox one x, you’ll be able to play together seamlessly.

Or at least that’s what Activision promises.

So, what do you think? Are you excited about the reboot of Black Ops? Let me know what you think down below!

Looking to play more Legendary Games? Check our FREE guide of the Top Ten Games You Must Play Before the Next CoD arrives 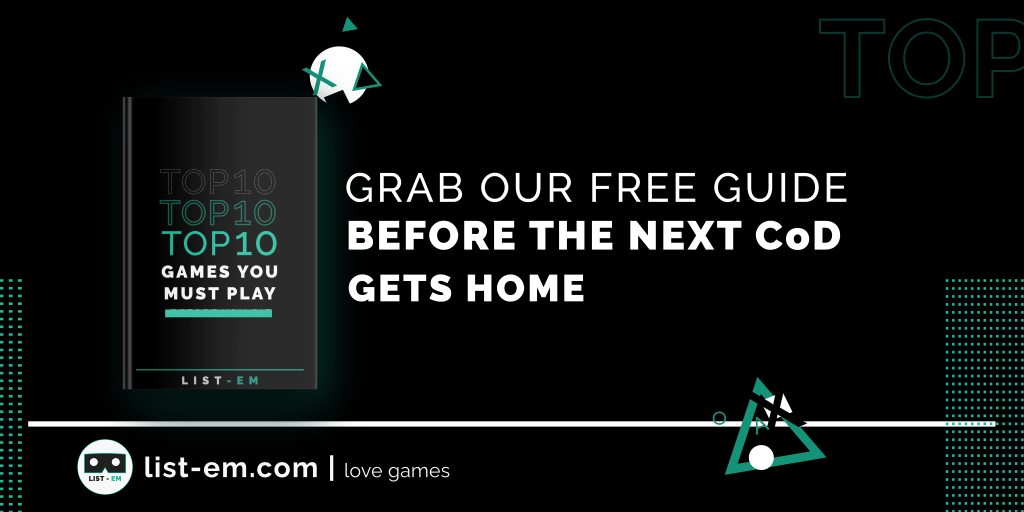 7 REASONS TO BE EXCITED ABOUT CALL OF DUTY: BLACK OPS COLD WAR | LIST-EM. All images featured on list-em.com are the copyright & property of their respective owners. Images by List-em or its creator are clearly stated. But, if there is anything on List-em or its affiliated sites, that has been improperly credited, please email us at [email protected] So, if you have any concerns about an image, please let us know if you would like the image to be correctly attributed or removed and, we shall do so promptly and courteously.